On Saturday, 3rd September 2016 an awareness and training programme was organised for the villagers of Potkhal and Baste.
We, along with the staff of NIRID, had planned out this event to train and create awareness on using family toilets instead of defecating outdoors. This will provide a clean environment for children to play in as well as prevent water pollution which in turn reduces the chances of water-borne diseases resulting in overall hygiene and growth.
The advocacy and training programme was designed with simple illustrations and colourful paintings to emphasise health and hygiene, cleanliness and dignity to the girl child and women. We also instructed them on how to keep the toilets clean without using chemical cleaning agents which harm the ecosystem. The importance of washing hands with soap after using the toilet and before taking meals, and imparting the
habit to children were other focus areas.
We found that NIRID and the village committee had worked at the grass-roots level to educate and create awareness, which resulted in enthusiastic villagers attending the programme in large numbers, with each one of them now keen on having their own family toilet!
We also identified the problems faced by the villagers of ringing water from distant wells as well as storing the water. As a result we are offering 100 litres of water to the villagers at a subsidised rate.
President Sucharita Hegde and PP R.P. Anand inaugurated the last phase of the construction of family toilets under our Global Grant 1635575.

Dear Rotarians, With the blink of an eye the year 2019 has come to an end. From July to December 2019, six months have passed and I am surely... 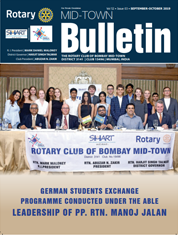 Dear Rotarians, Very warm greetings to all of you! Every month, I get a call from our talented editor, Rtn. Sunayana Vora, who respectfully... 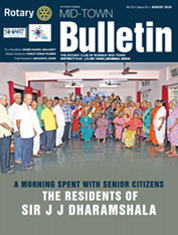 Dear Friends, Two months have passed already but it feels like my installation as the Club President happened only yesterday. The clock is ticking...