Our recent visit to Kamla Mehta Dadar School for the Blind

Kamla Mehta Dadar School for the Blind completed 113 years of service to the community. Its 113th birth day was celebrated on Sunday 14th July 2013 at their magnificent premises in Dadar. Set up originally by the American Marathi Mission to serve the children blinded by the Sholapur famine at the turn of the 19th Century, it has since been catering specifically to visually challenged girls, and, is the only one of its kind in Mumbai and its environs.

It grew steadily, serving many a recisstude, to become one of foremost center of education and rehabilitation of blind girls in Maharashtra.

From a modest one room, it moved in 1920 to its own building which houses the school and hostel. To expand educational amenities & hostel facilities, two new buildings were constructed on the school campus and the name of the school was changed to Smt. Kamla Mehta Dadar School for the Blind in the year 1986.

The ceremony started with the Chairperson of the institute, Smt Honsa Mehta, offering a tribute to the founder, Mrs. Anna Millard, in the traditional manner. This was followed by a welcome speech by the Director Smt Suparna Ajgaonkar.

The cultural programme followed suite. A number of dance and music items were performed by the girls in perfect timing and unison, to the delight and amazement of the packed audience.

Thereafter, prizes were distributed to students for achieving high standards in education, music and other performing arts.

The last item was the traditional “Happy Birthday to You” sung by the visually challenged girls and echoed by all present.

It was a delightful and entertaining visit for all of us. 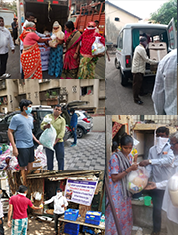 Well-known journalist Kalpana Sharma was the Speaker on 18th Sep 2019. She spoke about the recently released book 'Single by Choice' which is a...